Thank you for your patience while we retrieve your images.

11 photos
The elephant seals at Piedras Blancas beach in California offer visitors one of the most dramatic reality shows on earth. In very few places can you come so close to a mass breeding colony. The seals haul up at various times of the year.
In December mature males fight violently for mastery of beach territory and beachmaster ranks are decided. In January females arrive to give birth to babies conceived the previous year, and suckle the babies, and squabble loudly with each other when someone gets close to a baby.
Females in a beachmaster's harem mate readily with him. Meanwhile lesser males try their chances on the edges of harems. Females resist these unwanted advances strenuously. Beachmasters chase the intruders off into the sea - leaving a perfect opportunity for other intruders to try their luck with the ladies. A male chasing a female or another male wobbles along the beach like a giant grub and takes little care if a baby is squashed on the way.
The females leave for the open sea as soon as they have mated, leaving their fat weaners to their own devices. The weaners lie on the beach until hunger and thirst drive them into the ocean. They learn to swim and fish for themselves.
In May younger males and females of all ages join the weaners for moulting.
Elephant seals spend most of the year alone, so they are not well socialized and spend much of their time just cooling off, flipping sand onto their backs, arguing, or fighting.
Categories & Keywords
Category:
Subcategory:
Subcategory Detail:
Keywords:
© Paul Harrison 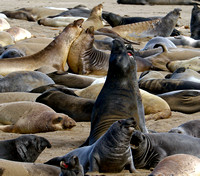 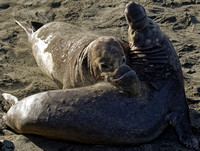